You might be an amazing photographer, but does your branding represent you well? Music photographer Adam Elmakias reveals all about his branding…

Branding isn’t just about a logo, it’s much, much more. You can try and avoid it, but in the modern day everyone is expected to have a website and a social media presence, and if you don’t, it’s all shock horror. Online platforms not only provide a perfect place for sharing work, they also allow you to put a message across to an audience, in business terms that means showcasing your brand, work and selling products. 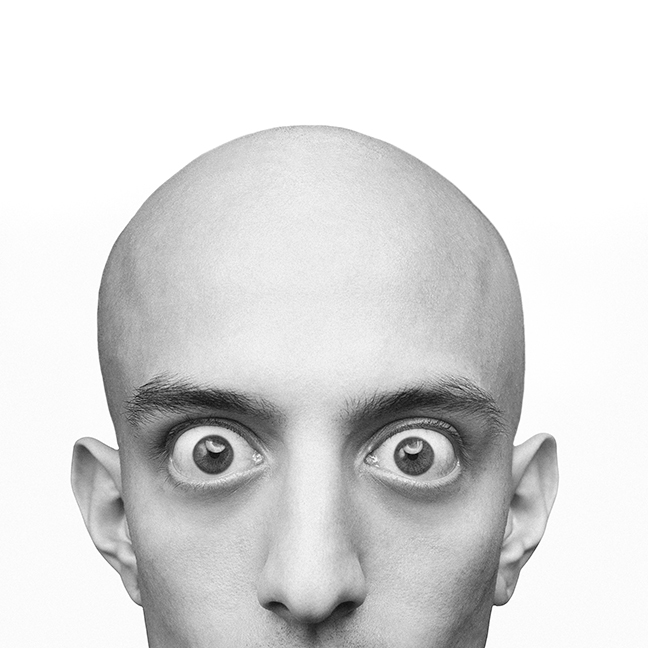 San Diego-based music photographer, Adam Elmakias started shooting concerts from the age of 16 as a way to get into them for free. Ten years later and he’s a big name in the music industry amongst bands, music fans and even other photographers. His social media stats of 87.5k Twitter followers, 466.8k Instagram followers, 123.5k Facebook likes and even more on other social platforms are definitely something to brag about, not forgetting his portfolio of shots that ranges from the likes of Metallica to Justin Bieber. So where did his big break come from, is there a key recipe for growing your following?

“There weren’t really any big jumps, it’s been slow and steady for ten years now,” Adam tell us. “Social media is definitely a good outlet and a way to get in. If you’re starting out it’s so much easier to take a good photo and be able to show people.” 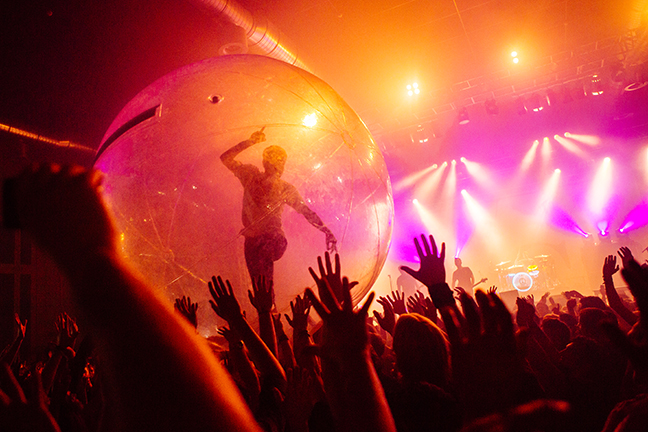 In terms of growth it might not be something you can really measure, but it will happen. Adam’s following has grown over time, which reinforces the need to keep at it, while not giving yourself a hard time for having just a couple of hundred followers.

“Sometimes it goes up, sometimes it goes down. At the moment it’s not as popular as it was a year ago in the social spectrum, but that’s how, quote unquote, celebrity as in being an object, how that life works, it goes up and down,” he says.

Building a brand online means you need to invest time in your online activity. This has to be one of the biggest challenges for busy photographers who would rather be out shooting images than huddled over a keyboard, blogging into the wee small hours. Adam found that initially he spent a lot of time online, and suggests that people wanting to build a brand need to do the same, but not to the point that it becomes all-consuming. “I guess my view has changed on how much time I spend,” he tells us. “When I was younger, I definitely used the Internet a lot and it helped me to get where I am, but at the same time I didn’t want it to become all I did. It should happen effortlessly, but it shouldn’t be what you focus on every day as it can become counterproductive.” 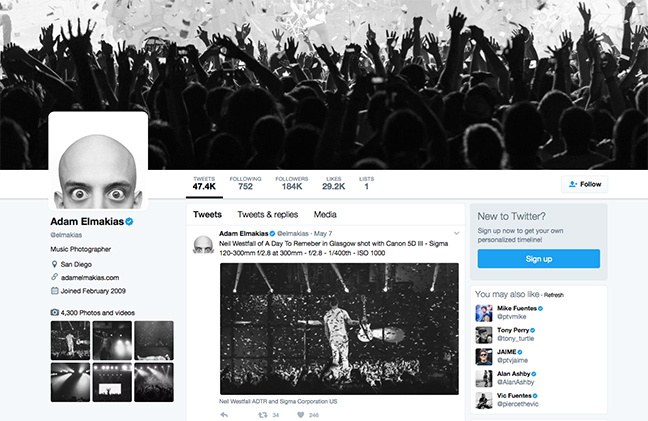 Interacting with your audience is key. Think about the last time you tweeted a brand, celebrity or someone whose work you were fond of. If they didn’t respond, were you disappointed? And if they did reply, like or retweet your post how did that make you feel? We all like a bit of acknowledgement and appreciation every now and then, and your audience is just the same.

“Of course interaction is important, but I can’t respond to everyone otherwise I’d go crazy. When I started with Myspace in the early days I just started talking to people and word of mouth was really good. Now I have someone who works for me and responds to all of my Facebook messages and emails, because we get a lot. Unfortunately I just don’t have the time to respond to everyone, if I happen to be on the computer at the time then I’ll respond,” Adam confesses.

When it comes to posting content online you need to consider what type of content you want to post. Rather than just uploading a photo, try writing a blog and share it across your social channels. You also need to ensure that the content you are posting reflects your brand. Timing is another important factor, consider when your audience is most likely to be active online. For a music photographer this might be just after a gig has finished, otherwise between 5:30 and 6:30pm when people are commuting from work, or even at lunchtime or weekends. You also need to consider how often you post.

“Don’t post about a subject ten times a day, post about it every two days or so, just to help remind people,” Adam says.

It’s important to keep people up to date with your work, but at the same time you don’t want to annoy them by filling their feed with repetitive content.

“It just needs to be organic and fun. It shouldn’t be a task every day to maintain,” Adam adds. 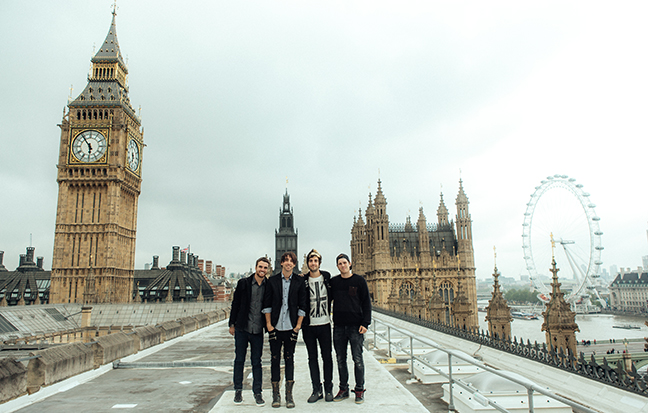 So how do you come up with a successful brand? There are companies dedicated to helping people create branding for their business, but what about doing it for yourself. Adam has an interesting view: “You don’t really have to come up with it, because it’s just you. Branding done wrong is thinking about what you want to do with it and branding done right is thinking about yourself and what you want to focus on,” he says.

“For me it’s more figuring out what I like and want to show people and then focusing on it. So, I have a cool cat, I’m bald and I really enjoy healthy food – these are all things that I enjoy and want to share,” Adam adds.

Back in the early days of Adam’s career he moved to San Diego and slept on his sister’s floor. With very little money he designed business cards in the form of a lens bracelet and bought a bulk pack for $100. He soon found that people wanted to buy the bracelets. “I went to a Warped tour and people came up asking to buy them, it was crazy,” he recalls.

While paid advertising may help, it’s little things like Adam’s bracelets that can have a big impact. While evidently not an online form of branding, they soon got picked up by Photojojo and created an online stir within the gadget industry. Websites started to feature them, which in turn helped to promote Adam’s own website and work.

To this day Adam still uses the bracelets to his advantage: “I give out my bracelets at concerts I attend to the front row of kids. They all have my website on them so it’s a cool way to connect with people,” he says.

This bracelet serves as both a marketing tool and source of income, but they aren’t Adam’s only venture, he’s got his own T-shirts, sells prints and has recently launched his own magazine showcasing his work, all in keeping with his branding. 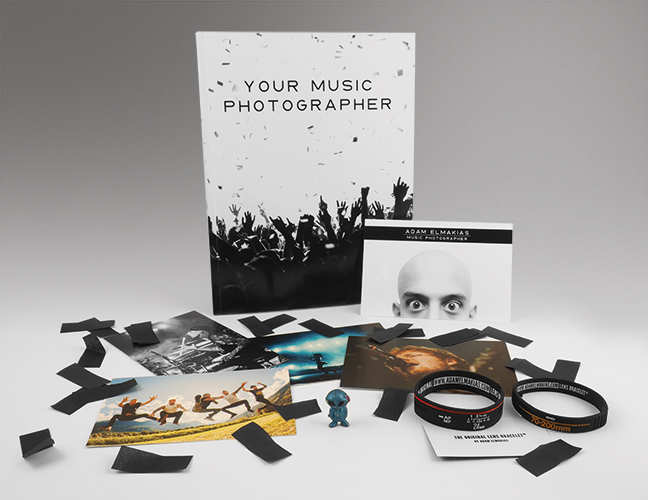 The magazine, Your Music Photographer features a selection of Adam’s images, as well as short handwritten captions detailing the show and artist, with comments about the image. Adam has really gone to town with the magazine; not only do fans receive it, they also get a selection of postcard printed photos, one of which promotes the release of the next issue; a thank you note; a selection of lens bracelets; and also a small alien figure. “People say I look like an alien because of my freakishly out of this world baldness, so I incorporated that into my branding,” Adam explains.

It’s important to keep your branding consistent and a second opinion is always useful. “The magazine was and still is my favourite and most personal project. I love it because it’s my work. The front cover and back cover are in line with my branding. I did have a few ideas that didn’t get used; my girlfriend is good at giving me the honest, but sometimes hard to hear, truth. She has a design eye, I just take photos.”

“The magazine was sent out to everybody who’s in it that I know, I sent it to management and the publicists of the bands, as well as some of my friends. I probably sent out 150 in total, but that’s marketing, the idea is that they put it on their coffee table and somebody sees it and they like it. Mostly I just want people to have it, but obviously it has other benefits,” he says. “I now have something that I can create on my own that supports me and people enjoy it.” 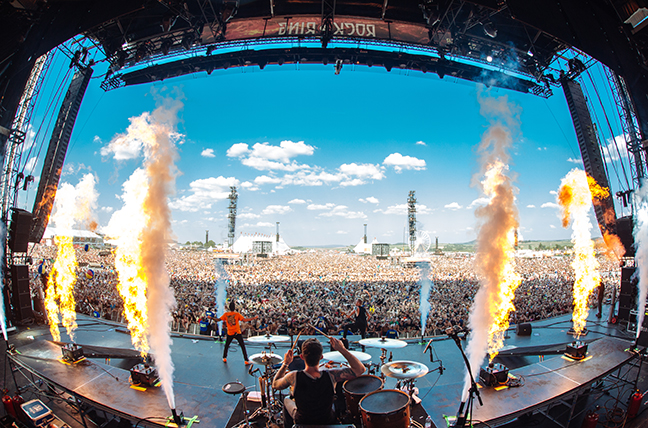 When it comes to creating your brand Adam suggests taking a fun approach: “Think of yourself as a cartoon character, identify five traits that you really want to focus on and every now and then post about them.

“The best thing I can say is you need to be you – not in a selfish way, but you need to figure out what you are and just do that. You don’t have to change and you don’t have to fit in with anything because then you’ll progress in a direction that you won’t enjoy. I think that the biggest thing with photography is you as a person.” 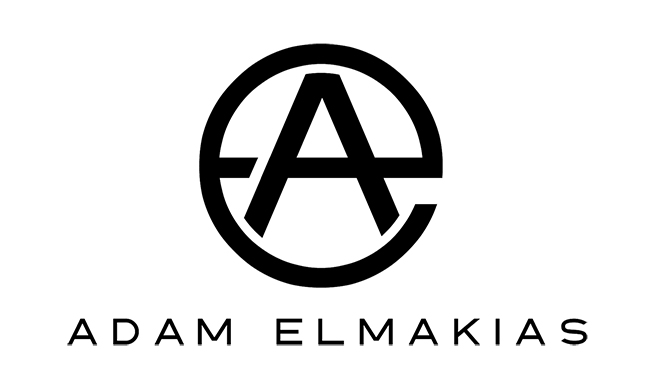 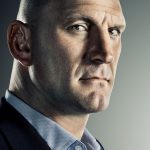 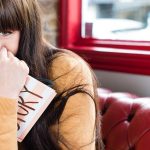 Stuck at home, we're forced to think outside the box, but shooting food dyes...

If you’re keen on street photography, it’s important to know your legal rights and...

A glass ball may seem like a strange thing to keep in your kit...

Lighting with the fantastic Forza 500

If you need the complete lighting package of power and real versatility, the NanLite...
Read Here